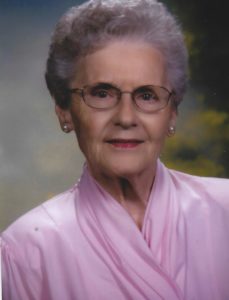 Fern E. (nee Lutz) Myhre, 86, passed away on February 28, 2020, in Kenosha, WI.  Born March 8, 1933, in Caledonia, MN, she was the second youngest of four daughters of the late Arthur and Lydia (nee Tessmer) Lutz. Raised in the Caledonia farming community, she attended Dr. Martin Luther College in New Ulm, MN, as a teenager and young adult, after which she embarked on a career in parochial education.

She met her future husband, a recently-returned-home Army veteran named Warren (“Buckshot”) Myhre, while visiting her family following an out-of-state teaching assignment.  They married in Caledonia in 1955 and moved to Kenosha not long thereafter where they worked, lived their lives, and raised their family. Over the years, Fern taught at various elementary schools in Kenosha, including Friedens, St. Lukes and Bethany. Following her years in education, she worked for the J.I. Case Corporation in Racine, Wisconsin, from which she eventually retired.

A loving wife of nearly sixty years and mother of two, Fern was devoted to her faith and family, core values that she modeled and worked to instill in others throughout her life. She loved to bake for her children and grandchildren and her home was always warm and inviting. She especially loved telling stories about growing up on the farm in Caledonia and the happy and special bond that formed as the family worked to make a living in that small community during the great depression.

She was preceded in death by Warren in February 2013, and her three sisters — Helen, Ruth, and Betty Mae. She is survived by her son, Steven (and Natalie) of Las Vegas, NV, daughter Sharon of Kenosha, 4 grandchildren, Neil Myhre, Colleen Myhre, both of Schaumburg, IL, Nicolas Myhre, of Atlanta, GA, Megan (Mike) Luciano of Hoffman Estates, IL, and 4 great grandchildren: Madison, Mason, Ella and Nicolas Jr..

Due to COVID-19 and current multiple state travel restrictions, the family elected to postpone Fern’s memorial service until it is safe to do so.  Her and Warren’s remains will eventually return home to Caledonia, where they will be interred in a family gravesite in Evergreen Cemetery. The family requests that in lieu of flowers, donations be made to Hospice Alliance of Kenosha in the name Fern Myhre.