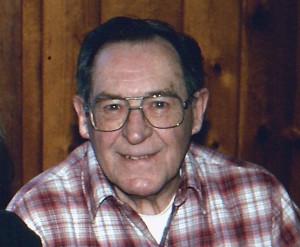 Don served in the Army Air Corps in World War II in the Pacific Theater.

In 1945 he married Mary Burzinski. in Montreal, WI.  They were happily married for 53 years before her death in 1998.

He retired from AMC in 1985 where he worked as a maintenance welder.  Prior to that Don worked for Ogleby Norton Mining Company in Montreal, WI.

He enjoyed fishing and hunting and built a cottage on Pine Lake in northern WI where he spent a lot of happy hours with his wife and children.  People who visited him there were treated to beautiful sunsets over Pine Lake.  Don loved baseball and football.

A Mass of Christian Burial will be celebrated on Wednesday November 27th  2013 at 3:00PM at St. Marys Catholic Church. (corner of 39th Avenue and 73rd Street) Visitation with the family will be on Wednesday at the church from 1:30PM until the time of mass. Entombment will follow at All Saints Catholic Cemetery.

In lieu of flowers, memorials may be made to either Hospice Alliance of Pleasant Prairie or to the charity of ones choice.