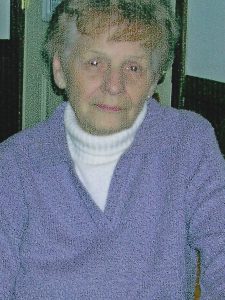 Dolores R. Brodsko, age 91, of Kenosha passed away on Wednesday, September 25, 2019 at Froedtert South Kenosha Hospital. Dolores was born on June 22, 1928 in Kenosha to Fred and Bertha (Holdt) Moldenauer. She attended Friedens Evangelical Lutheran School and Kenosha High School. Dolores married Martin Brodsko at Friedens on June 25, 1949. She worked for Samuel Lowe in her younger years and then for Western Printing for many years until her retirement. She was a member of Friedens Evangelical Lutheran Church. Dolores enjoyed walking, biking, baking, puzzles, family gatherings and her cat, Buttons.

She was preceded in death by, her husband, Martin; her daughter, Barbara; her parents; two brothers, George and Harold and her sister, Virginia.

Funeral services for Dolores will be held at 12:00 P.M. on Tuesday, October 1, 2019 at Friedens Evangelical Lutheran Church (5043 – 20th Avenue). A visitation with the family will be held at the church on Tuesday from 11:00 A.M. until the time of service. In lieu of flowers, memorials to Safe Harbor Humane Society or Friedens would be greatly appreciated.