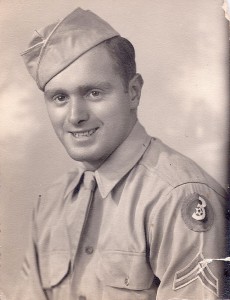 Clifford E. Haas, age 88, passed away peacefully Thursday morning August 8, 2013 with his wife of 63 years at his side.

Cliff was born on August 20, 1924, the son of Jerome H. & Lucille C. (Ankney, Waltz) Haas.  He attended St. Patrick’s grade school and was a proud member of the “Class of 1939” and William Horlick High School Class of 1943.  He enlisted in the Army Air Corps in December of 1942 and served in China, Burma and India, with the Air Transport Command.  He married Charlotte E. Knop at St. Patrick’s Church on February 18, 1950. He was a life member of the Racine Yacht Club where he enjoyed many years of sailboat racing and serving on the Race Committee. Cliff participated in the 2nd Honor Flight from Milwaukee and it was a proud moment capping off his memories of World War II.

Funeral services will be held on Thursday August, 15, 2013 at 1:00pm at St. Patrick’s church, 1100 Erie Street with Rev. Antony Thomas officiating.  Visitation will be from 11:00 am to 1:00 pm in the church. In lieu of flowers please make donations to the “Stars and Stripes Honor Flight”.

The family wishes to thank the dedicated staff of the VA Hospital in Milwaukee for many years of exemplary service in numerous departments; and to Compassionate Care Hospice for their care and support in the last week of his life.