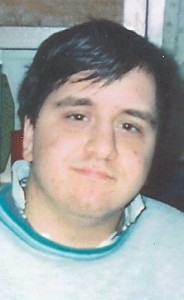 Christopher was born on June 27th 1969 in Kenosha to Jerome and Virginia (Giorno) Kreuscher. He attended Special Education classes at Jane Vernon School, Kenosha. Christopher is survived by his mother and one sister, Janet Wamboldt of Chelsea MI and three brothers, Steven Kreuscher of Kenosha, Lawrence Kreuscher of Pleasant Prairie and Jerry (Jay) Kreuscher of Kenosha. He was preceded in death by his father and maternal grandparents Joseph and Margaret (Kramer) Giorno Sr and paternal grandparents Rowland and Mary (Hunt) Kreuscher.

A Mass of Christian Burial will be celebrated on Wednesday June 27th 2012 at 11:00AM at St. Elizabeth Catholic Church in Kenosha. (4816-7th Avenue) Visitation with the family will be on Wednesday at the church from 10:00AM until the time of mass. Burial will follow at St. George Catholic Cemetery.

In lieu of flowers memorials to the Sky Lane Adult Family Home would be appreciated. (Checks should be made to Pleasant Street Inc.)

With heartfelt thanks to caregivers Wendy Hatters and staff, for their loving and exceptional care for the past 10 years, and the ICU staff at Aurora Lakeland Hospital.