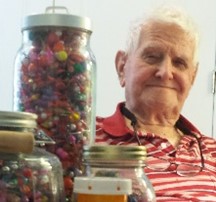 This morning, March 27, 2021, the literal end of an era came upon us with the passing of our beloved “Pops.  The Bible says the days of a man are numbered (Job 14:5) Char had 34,652 of them… In hours, that’s 831,648.  4,950 weeks and two days.  94 years, 10 months and 14 days.  The Bible says that each and every person is wonderfully and uniquely made (Ps 139).  Charles was that indeed, he was one-of-a-kind, special in all his ways, would literally give the shirt from his back and insist that you take it if he perceived a need.  To quote a dear friend, Steve Robinson when he learned of Pop’s passing, “Cap’n Hook” touched so many lives with a little bit of Jesus when he gave someone those flies that he made.  He had quite a few catches of great fish in his life and, I’m certain, that his influence could be said that he was a fisher of men as well, and for eternity, will be thanked as his legacy will pay forward for generations to come.  Love ya Cap’n Hook. You’re in heaven now catching fish you had no idea even existed.  What fun that must be.”  ‘Cap’n Hook’s’ hooks made it to most of the 50 states and at least to China with some foreign exchange students, to some Irish fisherman on the shores of the Shannon River, and to a shoppe keeper in Scotland.  He gave away tens of thousands of them, it was his delight to grace the tackle boxes of perfect strangers with his jeweled fishing treasures.

To know “Char” was to know a man of great integrity, moral stature, generosity and character, and boy he was a character!  He was a humble man who earned his living, and raised his children by the sweat of his brow for nearly 37 years in the auto industry.  He retired from the job he started in 1950, maintained lifelong possession of his original social security card, original work identification card issued by Nash Motors, and outlived all of his younger brothers and parents. He took his first commercial air flight at the age of 88.  All rare occurrences in 2021.  Pops purchased “first” bicycles and “first” fishing poles for too many children to count…beginning with his cherished children and grandchildren…and included some kids he only knew of.  He will forever remain cherished by his children, grands, great-grands, neighbors and all who had the pleasure of knowing him.

He passed six weeks shy of his 95th birthday; he always said that he was going to live to be one hundred…  One hundred years, a century,  Pops came so close to that goal.  Imagine what he saw in his lifetime… he was but a strapping lad during the depression,  he was blessed with one pair of jeans, and one pair of shoes per year.  Shoes were quickly outgrown, holes in the pants were definitely not chic, but to be patched by scavenging fabric from someone’s frayed outerwear…Granny saw to that with a skillfully applied hand-sewn repair.  No tattered clothing for her chicks.  Ironically, those new annual duds had been purchased with the proceeds of the sale of Granny’s carefully clutched chicken eggs and preciously gleaned goose feathers sold to make pillow ticks…

From the stories he shared from his youth, and he had a way with words and stories as only he and his siblings did.  There was no such thing as electricity, indoor plumbing, central heat, or, transportation other than the shoe-makers horse, providing they hadn’t met their untimely demise…the shoe-makers horses…that is.  Long distance calling was dependent on how long and far one could holler down the holler, and whether or not there was an echo.  Cell phones??  Space age fiction.  Regular phones?  If you were wealthy, maybe a party line that was shared by a community.  An operator connected your call, but anyone could put their nose in the call.  He DID walk to school and carried his lunch in a metal pail.  Lunch wasn’t purchased at school on a prepaid card, it consisted of a cold biscuit, or maybe a lard and sugar sandwich, after all, it was the depression and to have anything to eat, was a blessing.

Char’s childhood pets were not dogs, cats or even birds, but a pig named Penelope, and, an unnamed goat that ended up a gong on the dinner bell.  He suffered a life-threatening illness at the age of six that no child should ever know, and few children survived.  No antibiotics,  no pain meds, not much of anything available medically to those in the county, save maybe aspirin.  His was not a childhood of dreams, but of illness and pain, days, months and years of crippling leg infection, and the dread of tortuous treatment.  The sense of compassion and understanding he developed and emerged in his character was incredible and deep, one that he instilled in his children as he relayed his tender childhood journey through osteomyelitis.

Charles had several great pleasures in life, second only to loving his family and proudly providing for them.  Those pleasures included: engaging the unsuspecting in a political lashing …a history lesson of how President Roosevelt and all subsequent democrats saved the country by creating the WPA during the depression;  designing, wrapping and beading fish hooks, giving them to everyone he met, and “stirring the pot”; he never shied away from pitting one friend against another, or poking mates on a known subject of irritation for the sheer delight of watching a good row.  All of which he did with impish delight and a grin on his face that could not be resisted, all in good fun of course…

Charles, or Char, as he was known to his family, and “Pops” as he was known to his children and the succeeding generations, spent the last eight years on this earth living with each of his three children after selling his Zion, Illinois home of 50 years.  His final months were spent with his daughter, Judy, her husband Steve and their family “up north”, Winthrop Harbor, IL,  very near where he and Blanche raised their three children.  He spent the previous five years enjoying life in a log cabin on the shores of Kentucky Lake in Dover, TN with his youngest son, Jim and his wife Leah.  Prior to that, he had lived with his oldest son, Chuck and fiancé, Donna, passing the time fishing and wrapping hooks in Christopher, IL.

He was born, at home, Charles Owen Jester, the first of what was to become a rousing family of seven children to John William and Grace (Clarke) Jester.  He was known as Charles to his mother and father, two sisters and four brothers. Charles was preceded in death by his beloved wife of 61 years, Blanche Joan (Meyer) Jester.  He is survived by three children: two sons, Charles (fiancé Donna Green) Jester of Christopher, IL, Jimmie Lee (Leah) Jester of Dover, TN and one daughter, Judith (Stephan) Edwards of Winthrop Harbor, IL, and two sisters, Elouise Greenup of Greenup, IL and Loretta Harding of Corinth, MS.  He was preceded in death by his parents, John William and Grace (Clarke) Jester and all of his brothers, James (June) Jester, Jack (Deloris) Jester, William (Mary Lois) Jester, Jr. and Thomas (Shirley) Jester.

A memorial will be held for Charles on May 22, 2021 in his favorite “fish fry barn” at the home of Jim & Leah Jester in Dover, TN with Rev. James M. Stockdale officiating.  Please email the Jesters at jesterleah1@gmail.com for details of the memorial service. All are welcome.