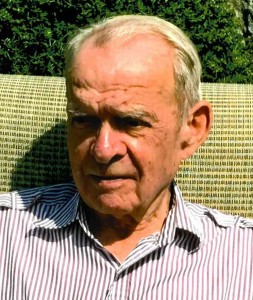 Calvin was born on November 21, 1933 in Kenosha to William and Helen (Watkins) Callow. He served in the U.S. Army and made his living as a barber. In August of 1955, he married Marlene Nehls. Though they would later divorce, they raised four wonderful children.

Calvin loved being a barber. He enjoyed reminiscing and swapping stories with his customers and kept working his whole life. He was especially proud of how many “first haircuts” he gave, and once gave a haircut to golfer Arnold Palmer who was in town for a tournament. He loved to play pool and followed the Packers and the White Sox avidly.

Calvin’s morning ritual was to have coffee while he worked on that day’s crossword puzzle, and then drive to Lake Michigan to enjoy the boats and views of the water. His absolute favorite times were spent visiting his son in Rhinelander, and building the perfect campfire every day.

Surviving Calvin are his daughter Denise (Ron) Gehrke of Houston TX, and his sons Alan (Laura) Callow of Las Vegas NV, Jeffery Callow of Nokomis Florida and Kurt (Lori) Callow of Rhinelander, as well as nine grandchildren and nine great-grandchildren.

Calvin was preceded in death by his parents, his sister Betty and his brothers Bill and Linn.

A funeral service for Calvin will be held on Thursday October 26 at 12:30PM at Northshore Garden of Memories (1801 Green Bay Rd. North Chicago). Visitation with the family will be in the chapel at Northshore from 11:30 until the time of the service. Burial with military honors will follow immediately.

In lieu of flowers, memorials to the American Cancer Society would be appreciated.