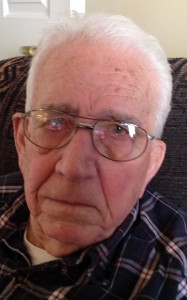 Byron U. Grobe, age 91, a resident of Kenosha died Monday, February 10th, 2014 at the Hospice House in Pleasant Prairie.

Byron Ulysses Grobe was born on November 23, 1922 in York Nebraska to Lewis and Evangeline Grobe. The family moved to Racine in 1929 and Byron attended school there.

On October 31, 1942 he was united in marriage with Elaine Marie Buelow. He served in the Army in World War II for three years and was honorably discharged in January of 1946.

Byron worked as a steel inspector for Belle City in Racine and then was employed by the American Motors Corporation for 30 years; ten of those as a supervisor. He retired in 1976, but kept himself busy with work as a handyman. He enjoyed fishing and was a member of the local VFW.

He was preceded in death by his wife Elaine in 2011, and by his parents, two brothers Lawrence Grobe and Reynold Grobe and one sister Twila Thomas.

Funeral Services will be held on Monday, February 17th, 2014 at 11:00 A.M. at the Kemper Center Founders Hall (6501 3rd avenue, Kenosha, WI, 53143). Visitation with the family will be held on Monday in Founders Hall from 9:30 A.M. until the time of service. Entombment will follow at All Saints Cemetery. In lieu of flowers, memorials to Hospice Alliance would be appreciated.

The family wishes to thank all the caregivers from Clare Bridge of Kenosha and the staff of Hospice Alliance for the care and compassion that was shown to Byron.