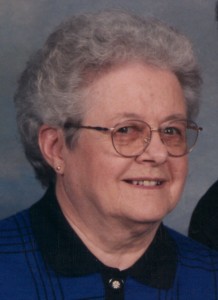 Born on February 5th 1928 in Kenosha, she was the daughter of Emil and Nelly (Cole) Fiege.

A lifelong Kenosha resident she received her education at Friedens and Bradford High School of Kenosha.

Betty was employed for a time at Sears, while it was located in downtown Kenosha, and then when it relocated to Pershing Plaza. She then worked at Kenosha Savings and Loan as an administrative secretary until she retired in September of 1987.

Betty was a long time member of Friedens Evangelical Lutheran Church and was active in the Ladies Aid. She was a reader, and loved to cross stitch and knit. She enjoyed spending time with her family.

Betty was preceded in death by her beloved husband Melvin, her parents, and her son Paul.

Funeral services will be held on Wednesday January 18th 2012 at 11:00 a.m. at Friedens Evangelical Lutheran Church in Kenosha. (5038-19th Avenue) Visitation with the family will be on Wednesday at the church from 9:00 AM until the time of services. Burial will follow at Sunset Ridge Memorial Park.

In lieu of flowers, memorials would be appreciated with memorials to be designated at a later date.