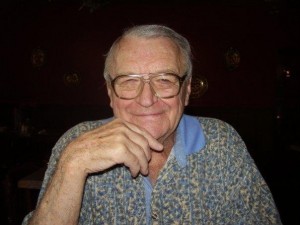 Born August 20, 1930, the youngest of three children to Rudolf and Irene (Csavoy) Waluch, following the families’ emigration from Trencin, Slovakia (then Czechoslovakia) in the late 1920’s.

He attended Kenosha schools and graduated from Mary D Bradford HS, participating in basketball and track. Following school, he was approached by the Arthur Murray Dance Organization and offered an opportunity to learn all methods of dance steps. Tony was light on his feet and his naturally ebullient personality made him a favorite dance partner.

He served in the US Army during the Korean War, and maintained lifelong contact with fellow soldiers from that era.

Serving as a union steward for the IBEW for many years, Tony worked as a dispatcher for the Wisconsin Gas & Electric Co., where for 37 years he was the calm, assured voice that Kenosha and Racine relied upon for service assistance.

Tony was an avid golfer, and for many years played in leagues at Petrifying Springs, winning many EMBA championships for his efforts. Upon his retirement, he wintered in Sarasota, FL and Winter Park, FL with his daughter – where he met up with countless Kenosha friends, continuing to hone his game – as well as his considerable culinary skills…never cooking for 2 – always the more the merrier.

Tony loved his family, and always looked out for those less fortunate. He was a kind, loyal friend with many friendships spanning decades. He was quick with a joke and a smile, making friends everywhere he went.

Tony shared his lifelong love of the Green Bay Packers with his kids.  Sundays were about decking out in “Packer-wear” and watching the game “hashing out details during the breaks”, or complaining about it after the game…it could get pretty loud at Cambridge on a Sunday. Saturdays, it was all about the Badger games.

He was preceded in death by his parents, Rudolf and Irene Waluch, his brother Steve Waluch and his infant daughter, Jean Marie.

The family wishes to thank the professional staff at St. Catherines CCU, for the excellent, compassionate care he recently received.

In lieu of flowers, memorial contributions can be made to the American Heart Association.

The family will receive friends at the Kemper Center, Founders Hall (6501 3rd Ave.) on Friday, Sept. 12th visitation at 3pm, followed by service.  A reception will be held immediately after, at The Boat House restaurant, located at 4917 7th Ave. Kenosha.