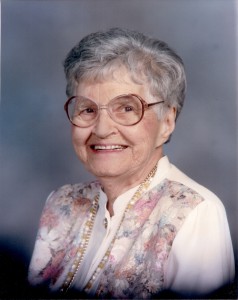 Alvina was born on September 30, 1914 in Detroit, Michigan to Frederick and Caroline Bredefeld and moved with her family to Oconto Falls, Wisconsin at age 4.  When she was about 12, Alvina committed her life to Christ and that faith grew ever deeper throughout the remainder of her life.  At age 15, about the time of the Great Depression, Alvina left school and moved to Chicago to work as a nanny.   There she met and fell in love with Rudolph Primuth.  They were married on September 1, 1934 in Chicago, Illinois and then moved to Racine, Wisconsin where they lived for the next 56 years until Rudolph’s death in June 1990.  While their income, measured in dollars, was always modest, together they bestowed eternal riches on their family and friends by raising their sons in the nurture and admonition of the Lord, by faithfully serving as members of  Racine Bible Church and by sacrificially sharing their home, time and modest means with others.  This included providing a home for Rudolph’s father (“Opa”) for over 30 years, and during this same time being mother and father to two nephews, Helmuth and Elmer Primuth, for a number of years.  After Rudolph’s death, Alvina continued to be a Godly role model to her children, grandchildren and great grandchildren.  As she did before Rudolph died, for the remainder of her life, Alvina always exemplified the proverb that “a cheerful heart has a continual feast” and was always quick to tell others about her faith in Jesus and her complete confidence in God’s plan for her life.  Later in life, Alvina began writing poetry about her Lord and Savior and the blessings available to those who walk with Him.  Her poems appeared in local newspapers and on the Internet beginning in about 2000.  Later they were compiled in a small book, which was widely distributed and a blessing to many.  During the last 13 years of her life, Alvina counted it a real blessing to be part of the Lincoln Villas North senior community in Racine, Wisconsin where she enjoyed the love and support of many friends.

Alvina is survived by her three sons Rudolph Jr. (Dorothy) of Racine, Wisconsin, David (Carol) of San Diego, California and Richard (Vicki) of Minneapolis, Minnesota.  She is also survived by six grandchildren, 14 great grandchildren and many nieces and nephews.

Alvina was preceded in death by her husband Rudolph on June 18, 1990 and by her parents, her two sisters and four brothers.

In lieu of flowers, memorials to Racine Bible Church Missions Fund are suggested.

The family wishes to gives special thanks to Barb, Belinda, Dominique, Danielle, and many other caregivers from Visiting Angels; Dawn, Kizzie, Debbie and many other staff from Community Care; the staff of Hospice House; and, Kris at Lincoln Villas North, who guided Alvina and the family during the last years of her precious life.