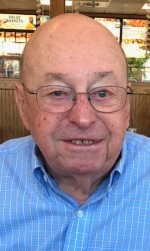 Allen was born in 1927 to Norma and Benjamin Kuhn, and grew up in Chilton, Wisconsin in a loving family of modest means with his brother, Daniel, and sister, Shirley. He played basketball and ran track for Chilton High School, and skate-jumped barrels on the frozen Manitowoc River. He served his country in the Army towards the end of WWII, from 1945-47, and was eventually stationed in occupied, war-torn Germany where he experienced first-hand the horrific aftermath of war and genocide. This experience also awakened in Allen a curiosity for the world outside of northeast Wisconsin, and inspired a life-long love of travel.

The trajectory of Allen’s life was shaped by the opportunities provided him by the GI Bill, a college education (B.A. Marquette University), and hard work. Fresh out of college, he took a job with the Marine Bank (later Bank One) in Milwaukee and stayed there until retiring 39 years later. Known and appreciated by colleagues for his clear-headedness, integrity, and insight, he was eventually promoted to Vice President of the Loan Review Department. But even more important to Allen was his marriage to Barbara Heimann in 1963, which transformed a fun-loving bachelor of 36 years into a devoted husband and father of three children. Making their home in Brookfield, Allen valued the simple and truly important things in life: family, friends, faith, and grilling out on the back patio. He was fond of his many fishing trips to Canada with life-long and new friends from the Chilton area, and his son, Karl. He also cherished his numerous traveling adventures in retirement with Barbara, and the tremendous blessings of eight grandchildren. During his long retirement, he also devoted time to his community, volunteering for Frieden’s Food Panty, Habitat for Humanity, the Sisters of Saint Francis, and his congregation, Trinity United Church of Christ in Brookfield.

Allen is preceded in death by Barbara (2011), to whom he was admirably devoted, his brother Daniel Kuhn (1997), sister-in-law, Mary Francis Heimann OSF (2016) and his daughter-in-law, Kathryn Kuhn (2020). He is survived by his sister, Shirley Puariea of Albuquerque; three children, Elizabeth (Thomas) Wank of Twin Lakes, WI, Louise (Daniel) Hubert of the Philippines, and Karl Kuhn of Kiel, WI; sister-in-law, Eloise Heimann of Milwaukee; and eight grandchildren, Anya, Samuel and Alexander Wank, Benjamin, Noah and Daniel Hubert, Joshua and Clare Kuhn; and many other dear relatives and friends.

A memorial service celebrating Allen’s life will take place on Friday July 9th at Peace United Church of Christ in Kewaskum, Wisconsin (343 1st Street, Kewaskum, WI, 53040). Visitation is scheduled from 9:45-10:30, followed by the service and a lunch in the Peace Fellowship Hall. Due to COVID restrictions, capacity for lunch will limited to 50 persons. Those wishing to stay for lunch are asked to RSVP at elizabethsflowers@gmail.com. The service will also be livestreamed, and may be accessed via YouTube (Peace UCC Kewaskum).

Memorial gifts in Allen’s honor will be received at the service or by mail for Peace UCC’s fund to support its work with Habitat for Humanity. Please send and make checks payable to Peace UCC.

Thought for Allen B. Kuhn