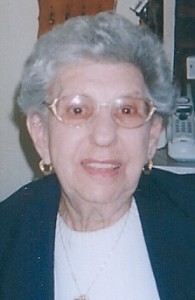 Alice was born on September 3, 1923 to the late Henry and Caroline (Arcelli) Ghezzi in Kenosha WI and educated in the local schools. She married Domenic Villella on September 3, 1949 at Mt. Carmel. She managed the lunch counter at F.W. Woolworth’s for many years serving her well known cheese cakes.

Alice was preceded in death by her parents, husband and one sister Olga Bernhoft.

In lieu of flowers memorials to Our Lady of Mt. Carmel Catholic Church would be appreciated.

Thank you to all Alice’s loving family, neighbors and friends and all the doctors, nurses and staff at St. Catherine’s Hospital.