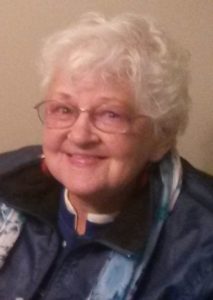 She was born in Kenosha on November 17, 1929. She was the daughter of Paul Terpstra Sr. and Winifred Ferwerda. She married Richard “Red” Moeller in 1951. They later divorced. Alice and Richard had 3 wonderful children, Michelle “Shelley”, Vicki and James.

As an adult, she lived in Park City, IL until 2000 when she moved back to Kenosha. She worked at various factory jobs and retired from Rock Tenn/Westrock in 1996. After her retirement she worked at Carson Pirie Scott in Waukegan, IL and later at the Boston Store in Racine. She finally retired from her retail job in her mid-late seventies.

As everyone knows, she loved her cats! She always had cats living with her from when she was young til the day she died. Usually more than one! She loved all animals. She used to put food out for a family of skunks when she lived in Park City!

She also leaves behind and will miss her best friends, Mary Rosmann and Judy Hansen.

Alice was preceded in death by her daughter, Shelley and many other loved ones.

Alice has requested no funeral services. She decided years ago to donate her body to science. We will have a get together to celebrate her life at a future date. Special thanks to the staff at Brookside Care Center, Hospice Alliance and previously Robin Way Eagle Senior Living for taking care of her.

She lived a long, good life and passed from old age and not due to Covid complications.

Memorials to Safe Harbor Humane Society or Hospice Alliance would please her.